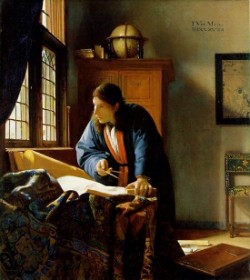 In the course of the 16th and 17th century, painting in the Low Countries -as the Netherlands were thencalled – developed an original type of realist painting. The Low Countries liberated themselves from Spanish rule in a long war from 1568 till 1648 and settled for a typical bourgeois nation, with a prince symbolically at its head but mainly ruled by representatives of the citizens. This war for indepencence made a deep impact upon national identity: great neighbouring nations were suspected, individual freedom and enterprise encouraged. The absence of a court culture, together with an increasing general wealth during the 17th century when the Netherlands were a very important factor in European trade and politics, made a highly individual and bourgeois art possible. Commissions for paintings did not come from a powerful church or court, but from individual citizens, often wealthy merchants. But also lower middle-class people commissioned paintings: visitors from abroad observed, to their astonishment, that high-quality paintings were a normal and common ornament in bakeries, butcher shops, inns, and in any household which had some money to spend on a nice interior. With the rich merchants, portraits were popular, and with the middle- and lower classes, imagery from the environment of their daily life were much in demand: street scenes, interiors, and all places where people got together. Paintings were, all in all, considered as a sane investment: one could always sell them in times of economic difficulties.Hence, a typical tradition was born, in which real life depictions mirrored the buyer’s environment. While subjects could be rather pedestrian and  unassuming, in the hands of a real master the pictural qualities could rise to olympian heights, as the works of Rembrandt, Vermeer, Hals, van Mieris, Heda, Steen, ter Borch, Metsu, Cuyp, van Ruysdael, van de Velde en Kalf demonstrate. Characteristic is that many of the painters depicted their own, personal environment, sometimes even restricted to their own rooms as in Vermeer. This tradition faded away at the end of the 17th century when, with the rise of France as a cultural force, painters began to meet the increasing demand of ‘chique’ painting, not tainted with the ‘vulgarity’ of daily life, following the fashions of the French court.In the 18th century, Dutch painting reached a low ebb only to be revived in the course of the second half of the 19th century. The genre of ‘environmental realist painting’ was occasionally taken-up again, and sustained itself since then as a typical but marginal phenomenon, untill modernism in the 20th century seemed to seal it definitely to the ‘museum of the past’. But after the Second World War, realist painting again appeared as a subversive counter-movement, in protest to the ‘official’ abstract painting and conceptual art, finding its way to foreign collectors and galleries. Henk Helmantel, Matthijs Roumlling, and many other artists ignored the mainstream fashions and followed their own creative instincts; genres like portraits, interiors and still-lifes could apparantly still offer inexhaustible variation and individual interpretation. The official museums however, keen on following international trends of concept art, to this day ignore the re-emergence of Dutch realist art, oblivious of the gradual change currently occurring in the western art world where realist art of any kind is at many places already an accepted option, next to all the other options.The work of Wim Heldens occupies an individual place in the contemporary art scene of the Netherlands. Understanding that the re-emergence of realist art as a counter movement to modernism was opening-up new perspectives, and realising that his main interest was the human condition and life as it unfolded around him, he quickly discovered that his talents could best develop in the portrait genre and the context of ordinary life, thereby picking-up an old Dutch tradition. But although much of his technique is traditional, the imagery is contemporary, and it is in this combination of the ‘old’ and the ‘new’ that Heldens found his originality.

Wim heldens was born in 1954 in Sittard, in the south of the Netherlands. He showed an obsessive fascination with drawing from an early age and when he applied to various academies, he already had an impressive body of work. Nevertheless, his unusual talent was not recognized and he was not admitted. Disappointed, but still determined, he applied to the Kunstacademie in Frankfurt (Germany) in 1974 and was immediately accepted. But when the good news came, he had just moved to Amsterdam and decided that, now he had proven his worth to himself, he preferred to go his own way.Making a living from portrait commissions, Heldensdeveloped the genre as a means to explore the human condition in a more general way. While around him the modernist revolution was gradually being accepted as a general norm, Heldens explored renaissance techniques and three- and two-dimensional form, including abstract structural patterns (the influence of abstract notions of form is always very close under the surface).Also, the treatment of light by masters of Dutch 17th century painting like Vermeer, Terborch and Nicolaes Maes held his fascination. He began to be asked regularly for exhibitions in galleries in the Netherlands. Various trips to Italy in the seventies were a great stimulation; the greatest impression in these years was the psychologically dramatic work of Carravagio.The discovery of the art world in New York opened a new field of stimulation and experience. In the period 1990 – 95 Heldens divided his time between New York and Amsterdam,easily mixing in the exciting American artistic community where he, within a couple of months, saw his work on show at the Henoch gallery in SoHo, later to be followed with exposure at the Ganymede Gallery and the Open Studio PS122, both in NY City. The wide variety of different trends – from abstract via pop art to photo realism – which he saw in East Village, where he had a studio, gave him the inner freedom and confidence to pursue and further develop his psychological realism. He viewed his personal style as a possible way forward after modernism had lost most of its credibility. He painted various portraits in commission, among others for the collector Raymond Saroff, who possesses an impressive collection of American native art. In 1995 Heldens participated in the exhibition ‘Representation Represented’ in the Arnot Museum in Elmira (NY) together with Janet Fish, Gregory Gillespie, Paul Cadmus, Claudio Bravo and Michael Leonard, where Heldens’ contribution drew much attention.From 1995 onwards, Heldens increasingly focussed on Amsterdam where he found his canvasses more and more in demand. In later years, he increasingly embarked upon free, i.e. not commissioned, paintings, to be able to concentrate upon a more versatile expression of human drama in contemporary life. The psychology behind his work gradually became more complex and ambiguous, claire-obscure more striking, contrasts sharper – all along with a continuously developing technique.Striking examples are the following canvasses: 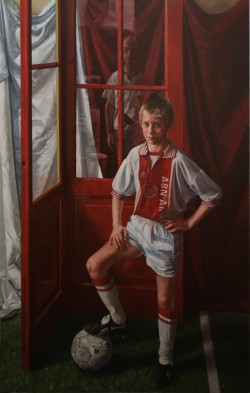 The ChampionThis painting from 1996 depicts Heldens’ adopted son in a specially arranged setting. The different planes are subtly balanced; the father is seen in the reflection of the glass door in the background, possibly worrying whether the glass will be safe? The format of this canvas is extraordinary: 130 x 200 cm, which makes – with the relative short perspective – a striking impression. The swagger and vulnerability of the boy are brilliantly struck (the eyes!); the big format makes him all the more seem small and grotesque in the rather pompous setting. The colour combination is, in fact, an almost ‘impossible’ one: red, white and green, and the fluent way in which lightand shadows are as yet balanced makes this very unusual painting a veritable tour de force. 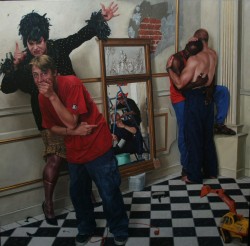 The ‘story’ of ‘The Mirror’ (2001) – again a big format, measuring 200 x 210 – is quickly deciphered: a gay couple embracing in the corner of a room which is being restored, is being laughed at by a teenager, drawing the viewer into the scene with his gestures. Behind the boy a rather big lady administers a reprimand (or is it a transvestite?). In a mirror we see another couple of people, apparantly part of the scene, a working man (laughing as well) and another boy rebuking him, thus mirroring the scene itself with other protagonists. At the top of the mirror, an idyllic scene represents something like a harmonious life. The whole scene breathes movement and life and seems to be a snapshot. The perspective draws the viewer in, as does the vista through the mirror where we see things on a much smaller scale. The floor with the square tiles adds movement to our focus and points to the centre of the scene, which is the couple in the corner. The asymmetrical arrangement, and balance of forms and colours, is complex yet natural; the teenager seems almost leaning out of the picture. This painting leaves nobody untouched: seen once, it is burned on the retina. 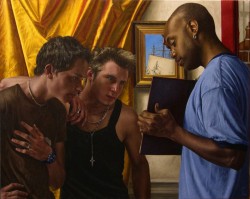 This canvas is related to a bit of dark Dutch history: the slave trade, one of the sources of Holland’s wealth in the 17th century, the knowledge of which was suppressed in the 19th and 20th centuries. Only recently attention has been given to this unpleasant part of the past. We see two typically ‘cool’ contemporary Dutch teenagers watching intensily at a picture, held up by – apparantly – a descendent of black slaves. The strong contrasts in light and darkness, and of colours, suggest a great depth, enhanced by the mirror which reflects a double image: a part of the picture in the room itself which is shown to the kids, but also a mast which seems to be outside. In Amsterdam this is also reality: a beautifully restored ship from the 17th century is moored at a kay and can be visited as part of the Navy Museum. The striking combination of elements, the expression of surfaces and tissues, and the supple and quasi-spontaneous way lines and colours form a well-balanced whole, show how the old-Dutch tradition of detailed realist painting can be re-interpreted and made contemporary. Heldens’ paintings found their way into private collections in the Netherlands, England, Germany and the USA and into the collections of the Arnot Art Museum, Elmira New York U.S.A., the Academic Hospital and the ING Bank in Amsterdam, the Bank Nederlandse Gemeenten in The Hague and the City Council in Sittard.Heldens is one of those artists who know from the beginning what they want to do. For him, painting is a psychological analysis, a narrative  of inner life and experience. His realism, which is rooted in renaissance painting and the 17th century Dutch realist tradition in particular, gives form to the human condition in modernlife while stressing the continuity of a valid and, in the 21st century, important pictural tradition.