The Dutch painter Wim Heldens has taken-up a mimetic tradition and re-creates life in fantasized but psychologically ‘real’ images, handling oldfashioned craft. The past and the present meet in a personal synthesis, as expressive as real life narratives.

In 2011 Wim Heldens won the prestigious BP Portrait Award of the National Portrait Gallery in London with a rather introverted portrait of his (adopted) son. From that moment, his oeuvre found a wider response, and the originality and artistic qualities of his work became more visible. Heldens is a convinced realist painter, a genre which is currently emerging in public space as an alternative to concept art and abstraction. In the contemporary cultural framework, which has become more and more pluralistic, realism in the visual arts is increasingly taken seriously, after decennia of being criticized as ‘outdated’, ‘conservative’, ‘kitsch’ or simply ‘superfluous’ – since we have already museums full of realist art from former ages.

Aristotle developed, in relation to the nature of the arts, the concept of mimesis which is art as a ‘mirror’ of reality, in which universal human experience is shown through the micro cosmos of the work of art. From this concept, the classical notion of art as something to be studied for their beauty, meaning and expression was developed, a tradition which is still with us today. Mimesis is not imitation, but an ambiguous complex of meanings including imitation, expression, representation and imagination. A ‘mimetic’ work of art is not merely an imitation of reality, but an expression of the artist’s interpretation of reality, in which on one hand the universal and recognizable, and on the other the particularly individual, find a synthesis. 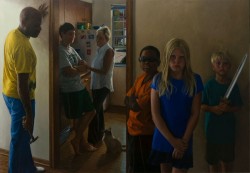 Heldens has conquered the old-fashioned craft of mimetic expression through painting, and his subjects are taken from his individual life experiences. His artistic development shows a quest for meaning, especially in relationships between people, where he finds the most concrete form of meaning which can exist in life. By depicting scenes from everyday life, he wants to show the universally human in terms of contact and situations, in which we can easily recognize an almost extreme ‘normality’, and – for some people – a certain ‘banality’. But here Heldens’ talent for psychological exploration shows itself: the seemingly ‘trivial’ subject is presented in such a way as to expose the deeper meaning of the image, which is often multi-interpretable, depending upon the sensitivity and intelligence of the observer. Often his images show a quasi-frozen moment where people look at something outside the frame, or in a context suggesting exchange, or conflict, or overture; or they are engaged in a mutual symbolic gesture or action. The precise representation of substances and surfaces, the distribution of light and shadow, the different intensities of colour, all contribute to a deepening of the observed reality on the canvas, thereby lifting the image from everyday reality and making it timeless. A mentally and emotionally accessible world is created as if the frame is merely a window upon a scene which exists as an autonomous ‘eternal’ moment, reflecting human life.

In this, Heldens follows the artistic tradition of the Dutch Republic from the 17th century, when depictions of daily life form a unique corpus of paintings, both realistically representing life as it showed itself to the artist’s eye but in the same time, exposing its beauty and expressive meaning. When, by way of an example, we look at Heldens’s quite recent canvas, ‘Ohio Girl’, we see a number of people gathered, in a relaxed and seemingly coincidental way, in an interior. The ‘Ohio Girl’ is the little girl right in front, looking at us as if suggesting that she could, if she wanted, tell us a lot about the people around her, who are all different in age, gender, and skin colour. It is as if we caught a domestic scene by accident, only noticed by the three children. The space is carefully constructed with a perspective suggesting house, gardens, and a world beyond; the subtle balance of the composition gives the scene a sense of harmony. This interior view with people doing their usual thing, is directly following the example of Dutch interior paintings by Pieter de Hoogh, Johannes Vermeer, Gerard ter Borch and others – but translated to the present time, where Heldens’ personal contacts in the USA furnish the human element. The people in the scene suggest all kinds of different human relationships, bringing different people together in a context of co-existence, suggesting implicit narratives as to stimulate the imagination: what are these people, each one, thinking or feeling? Gestures and attitudes provide hints, but there is ample room for interpretation, which is one of the aspects of this painting that captures the observer’s attention.

In this effective translation of an old tradition, Heldens shows the possibility of regaining painting as an entirely contemporary art, but rooted in the continuity of mimetic expression of human experience. Dutch painting is alive again….. and shows us the world as it is, and always will be, as a field of human relationships and meaning.

John Borstlap is a composer and cultural philosopher.His recent book about new classical music, The Classical Revolution, has been pubished by The Scarecrow Press, New York 2013.